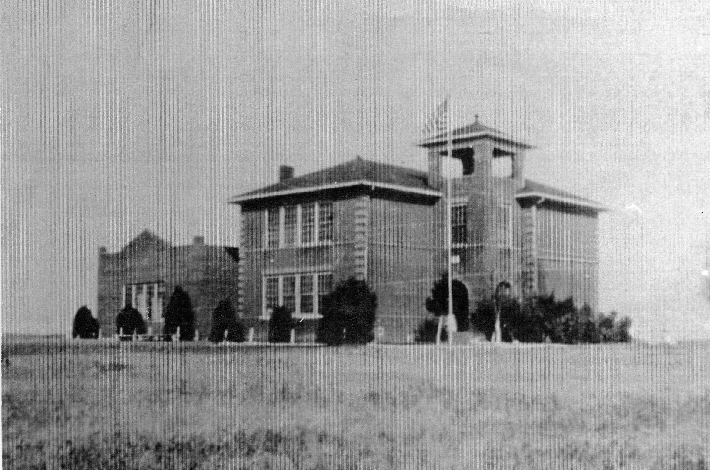 Old Clarita School
The first known school in the Clarita area was in a small community called “Happy Hollow” one mile north of what is now Clarita near old Kittie.  It consisted of a one room log house which the community built.  Since there were no public schools before statehood, the parents paid a fee to a teacher who conducted school for three months each year.  The rest of the year church services and various other community gatherings were held there.
The  next school was built in Clarita in 1910.  It was a frame structure with a sliding partition which could be divided into two rooms.  No one remembers where it was located although we do have a picture of it,  It was probably on the school land near where the large school was later located. George O’Neal taught the first term of school there, after the first year there were two teachers.
The brick two-story building was constructed in 1912.  The upper story was used for the high school and the lower part was divided, part of it being used for an auditorium  and the rest for a grade school.
In 1921 an auditorium was built onto the west side of the two-story school building.   In 1930, after the annexation of Wilson, Kite, and Lone Star schools, Clarita’s attendance went from 113 for the twelve grades to 288, so the auditorium was partitioned off to become the high school.
A white frame gymn was built to the east of the school from materials of the old Wilson, Kite and Lone Star school buildings.  It was one of the nicest gyms in the county, with a good basketball court and bleachers on the two sides. There was a big stage with dressing rooms on each side, red velvet curtians and an impressive roll up curtian with advertising for the various businesses in town.
There was always something going on at the gym. It was the heart of the community. There were basketball games, class parties and the plays each high school class was required to present each year. The community christmas program was an annual event with a huge tree, Santa Claus, and special plays and skits presented by classes from one through twelve. There were also minstrel shows, singing conventions, concerts, pie suppers and funerals. During World War II special programs were held to sell savings bonds and collect money for the Red Cross.
Occasionally groups of adults would put on plays at the gym and once the entire school put on an Operetta based on the story “Tom Sawyer”. It was an extravaganza with special sets and lots of music. Every class in the school was represented in the cast. Geneva Brashears O’Neal directed it with the aid of various teachers and parents.
In the early nineteen fifty’s the school realized the need for a separate lunch room and a meeting place for the many World War II veterans who were attending classes sponsered by the Veterans Administration. They heard that the barracks buildings at Fort Chaffee were to be destroyed and any one who would take them down could have the lumber free. The men of the community got together, commandeered trucks, trailers, and pickups and then spent several weekends salvaging one of the huge old buildings. The result was a building with a big lunch room and a meeting room which is still standing today and is used as a community center.
In 1958 Clarita High School was annexed to Olney and the top floor of the old brick building torn down. The grade school remained for another 10 years and then, in 1968, it too went to Olney. Eventually the rest of the school building and the old gym were torn down. Clarita, in its peak year of 1937, had 370 students. In 2007 the Clarita-Olney school district was annexed by Coalgate. Now, the only school in the Clarita area is the Amish school called Elm Creek. The rest of the children go to school at Wapanucka, Coalgate and Tupelo.
1