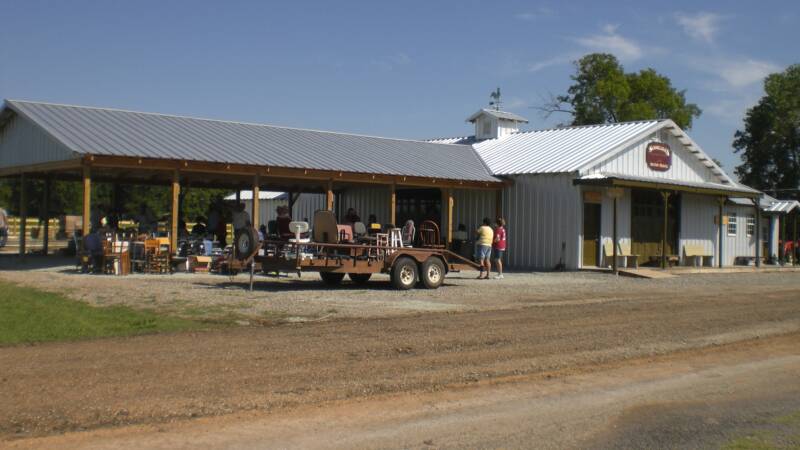 Rice Brothers Garage, formerly Clarita Carriage and Blacksmith Shop, taken about 1949. The two guys in the above photo are brothers Victor and Warren Rice. Victor is currently in the Veterans nursing home in Sulphur and sadly, Warren died at his home in Moore Oklahoma in February 2016 at the age of 94.  He was still active with his woodworking and hunting and fishing interests.  He built his last roll top desk in 2015.
The new Schmelzer's building was erected on the same location as the original Clarita Carriage and Blacksmith Shop. 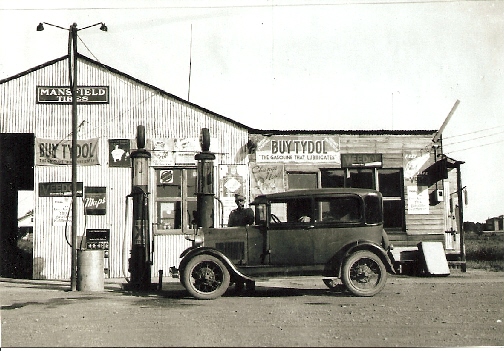 Schmelzer's Blacksmith Shop and Garage cerca 1930.  We are uncertain who the man pumping gas is.  But it is possible he is either Gene Schmelzer or Leslie Jones.
Schmelzer's History
The Schmelzer's building got it’s name from Gene Schmelzer who was the original owner of the building on this site. Mr. Schmelzer had a blacksmith business in old Kitty from 1905 until the railroad came through Clarita in 1909. At that time he moved his business here and called it “Clarita Carriage and Blacksmith Shop.”
Sometime in 1930 the building burned down.  It was rebuilt but there wasn’t much call for Carriage repair because automobiles had pretty much outdated them so he called the new business “Clarita Garage”
Business was good and in 1932, he hired Leslie Jones, who had just completed a course in mechanics in Oklahoma City, as a mechanic. At some point Phillips Oil Company bought the rights to put in gas pumps and an office there.  It must have been a good contract because Leslie’s daughter said at one time they wanted to get another oil company to install their pumps but weren’t able to because of a long running contract they had with Phillips.
In November of 1945 Leslie Jones bought the building and the business from Gene Schmelzer and ran it until November of 1948 when H.T. Rice bought it for is two sons, Victor and Warren.
In November  of 1950 Leslie bought it back from the Rice’s and ran it until his death in 1973. After Leslie’s death the building changed hands several times. The old domino players met there, playing in the old office building in winter and in front in the shade in summer.  Finally it fell into ruin and wasn’t restorable.
Winston Rice Jr. purchased the property in 2006 and constructed a replica of the original building on the same location.  Events, reunions, weddings, and special dinners were held at Schmelzer's
The Schmelzer's building is currently owned and operated by Little Orchard Pecans.
1