CEMETERIES
The Moore Cemetery, east of Clarita and the Wilson Cemetery North of Clarita, are the primary burial places for Clarita area residents both past and present. They are about the same age, having both been established in the late 1880’s and having most of their burials after the turn of the century.
The Wilson cemetery is where of most of the early founders of Kitty and people living north of Clarita are buried. It is almost an O’Neal family cemetery because so many of that family and their relatives are there.
Moore contains mostly people who settled east and south of Clarita beginning in the late 1880’s. There are many Olney area people here as Olney didn’t have a cemetery until much later.
A complete guide to the names of all the cemeteries in Coal County, both private and public, and a list of the names of the people buried there, is maintained by the Coal County Genealogical Society and may be accessed by calling or visiting the Coal County Genealogical Library in the rear of the public library in Coalgate.
MOORE CEMETERY
Location:  On Highway 48 go south of the Clarita exit sign about one mile. The cemetery is on the north or right side of road. The cemetery was on the original Indian grant of Frank Wright and there was at least one grave there early.
Mrs. Winnie Forgey Ridley, who was born in 1894, remembered the first grave at the Moore Cemetery, it was a small girl’s grave located on the east side of the cemetery with a lamb on the tombstone.
James and Elizabeth Moore moved to Indian Territory from North Carolina in 1892. They rented or leased the Frank Wright farm on which the  cemetery was located. The Moore’s son, Robert Lee, died in 1898, and was buried in the cemetery and may have been the second burial there. James Moore was buried there in 1910 and his wife, Elizabeth, in 1911.
When the Moore’s son Norman and his wife, Annie, married, they bought the farm from Frank Wright. At some point, perhaps when he moved into Clarita, Norman Moore donated the cemetery to the Clarita Community.
Since then several acres have been added to the original plot.  A pavilion, for the comfort of grieving families, was built a few years ago. The cemetery has many beautiful trees and is well maintained.
According to Christine Moore O’Neal, daughter of Norman and Annie Moore, for a brief time there was a Moore school one mile south of the Cemetery.
WILSON CEMETERY
Location: From the Clarita Post Office go west on O’Neal Street about two and one half miles. You will see the cemetery sign on right. Turn right and follow the road to the cemetery.
This cemetery started in the late 1800’s when a man who was working in the community became sick and died.  There was no place to bury him, so Dave Wilson donated a plot of land.  The people of the community named the cemetery after Mr. Wilson who was also buried there.
Maintenance and upkeep of the cemetery is a special project of the Wilson OHCE.  They have fund raisers and seek donations from the community and family members to keep it mowed, fences built and burial sites plotted in an orderly fashion.
There is a pavilion built in memory of Ralph and Lillie Stubblefield.  When the cemetery was almost filled to capacity Mr. Homer Parks donated more land. 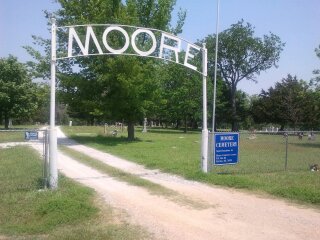 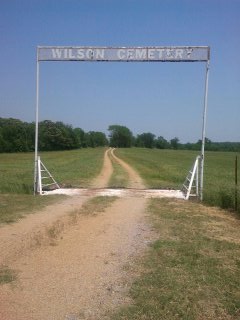 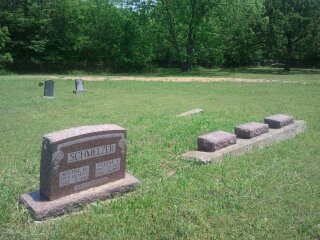 In Coal County
Clarita Monday afternoon
One of the most sad and heart rending events in the history of Coal County occurred at Clarita Monday afternoon about 4:30 o’clock when three bright boys of that little town gave up their lives in a well, to the noxious exhalations, or rather gasses, issuing from the earth, and deleterious, or fatal to human life. These are often known to exist in wells which continue long covered and not used,, and in mines and coal pits, and sometimes they issue from the old lavas of volcanoes. These damps are usually the carbonic acid gas, which instantly suffocates; or carbureted hydrogen, called fire-damp. Sometimes within a few hours they accumulate to such an extent as to smother human life instantly, even in wells that are being used and in every place of the above kind in this country there is grave danger of coming into contact with these damps.
The Schmelzer children, Arley Franklin, 16; Clarence Lavern, 14; and their sister, had returned from school and with them Dewey Brown, a 17 year old orphan boy, who is making his home with his grandmother, Mrs. Brown.
The children were playing in the Schmelzer yard when Inez dropped a roll of her mother’s patterns into the well. Clarence, as he had frequently done before, went down into the well on the rock walls. His older brother, Arley, watched him and as he was near the water he seemed to slip and fall. Arley started after him and as he neared the bottom of the well he too fell. Then Inez called her mother, Mrs. Schmelzer, and a number of neighbor women to the scene. It was with difficulty that Mrs. Schmelzer was restrained from going into the well after her boys, and Dewey Brown started to go down as the other boys had gone to rescue them, only to meet the same fate as they had met.
By this time Mr. E.A. Schmelzer, father of the Schmelzer boys and a number of men had been attracted to the scene by the cries. A young man by the name of Cameron was let down into the well, with a rope tied around his waist. He got hold of the boys and then dropped him. Cameron was pulled out unconscious, but it seems the folks could not realize the cause. Joe Headly then volunteered to go down and he was let down with a rope around his waist, and just as he neared the water, he fell in a limp and unconscious manner and was pulled out almost dead.
The bodies of the three boys were then fished out with well grabs, and everything possible was done to revive them, but to no avail. It was then thought they had fallen into the about four and a half feet of water and were drowned.
When physicians, who had been speedily summoned, arrived they stated the boys had succumbed to black damp and that it would be useless to further try to revive them as apparently they had not breathed after striking the water.
Funeral services were held Tuesday afternoon burial in the Wilson cemetery, near Clarita---all three being buried in one grave, and followed to their final resting place by one of the largest funeral processions of sorrowing relatives and friends ever witnessed in that section of the country.